Congratulations on deciding to learn the Tin Whistle! It’s a great instrument and with patience and consistent practice, will bring you and your listeners much joy!

This is my introductory course for the Tin Whistle and is perfect for anyone just starting out or for those that have been playing a while but want to brush up on some foundational concepts.

Practicing any discipline takes lots of patience! Be patient with yourself especially in Section 1 where you might want to jump ahead to “Trad Tunes”. In the first section, for purposes of example and ease of learning, I use simple tunes such as “Mary Had a Little Lamb”, “London Bridge”, etc… This is done on purpose. Since you are already familiar with these melodies, less time is spent on learning the tunes themselves thus allowing you to focus more attention on the concepts & techniques I’ll be trying to communicate.

Learning by Ear vs. Music Notation

I have provided both video footage and written notation of all examples, exercises and tunes. While being able to read music is a good skill to have, it is not necessary for the traditional Irish musician. I strongly encourage you to learn the examples by ear (through the video examples) as Irish traditional music is best learned this way. You will find as you progress that written notation falls very short of communicating Irish traditional music’s finer and more defining points.

Tin whistles are simple instruments but it’ll be good to give names to the various parts of the instrument so that we can use them in our discussions later.

As you may already know, you can spend as much or as little on a whistle as you’d like. Inexpensive “cheapies” start about about five bucks whereas fancy high end / handmade whistles can cost several hundred dollars.

Perhaps the best way to do this is present a glossary of terms below, starting with the mouthpiece and working our way down.

The mouthpiece on a whistle could be more correctly called a “fipple”. Indeed, the whistle is actually a type of “fipple flute”. The term mouthpiece is also sometimes refered to as the headjoint – though the term headjoint really means the whole top section (including the mouthpiece) of a tunable whistle (or flute for that matter).

Refers to the part of the mouthpiece that channels the air towards the blade (see diagrams below).

Ok, so we’re already using big words! Intonation is a term used to describe how well in tune a whistle is with itself. This can be checked with an electronic tuner though as you advance as a musician, you’ll be able to hear right away whether or not a whistle exhibits good or bad intonation just by playing up and down through it’s range of notes.

Makes up the longest part of a tin whistle. This is where the finger holes are located.

The holes that you place your fingers on to play the whistle. Most tin whistles have only 6 holes. 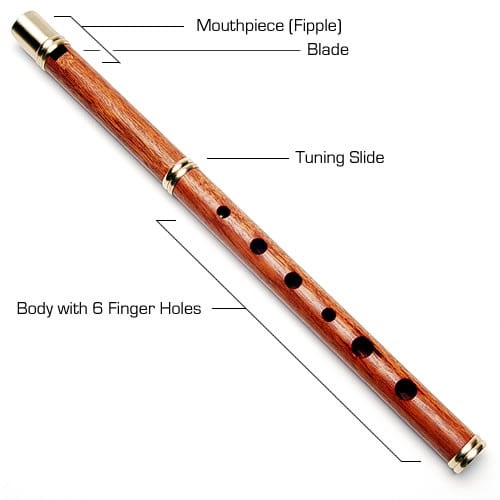 Now that we’ve learned to hold the whistle properly, let’s start making some noise! We’ll start off by playing a simplified version of “Mary Had a Little Lamb” that uses just fingers T1, T2 and T3 (“T” stands for Top- Hand/ “B” stands for “Bottom-Hand”). The trick here is that you seal each hole completely. If,for example, you do not seal the note “B” (T1) completely, the next note below – “A” (T2) will not sound fully or at all.

You should notice from the video example that we have to interrupt our air flow to sound out repeated notes (for example: “lit-tle lamb”). This technique is called articulation. The way that most whistle players articulate is by the use of their tongue (“tonguing”). This is done by “saying” syllables such as “ta” or “da”.

Now, try playing “Mary Had a Little Lamb in D”. This will require you to be able to seal all six holes properly since the lowest note in the tune is the low D note.

At this stage you should be able to seal all six holes of the whistle properly so learning the D Major Scale will be easy. All you need to do is add the notes C# and D’ and violá!

Now, try playing a couple more tunes in the key of D before moving on.

To warm up, and to get our ears back in the key of G major, try playing “Mary Had a Little Lamb” again in G, this time playing the D’ note. Don’t forget to raise T1 when playing D’!

Before we move on to the next section, play through these simple tunes to help you become more comfortable with playing in G.

Playing up to High B

At this stage you should be able to play fairly comfortably all the way up to G’ in the second register of the whistle. We’ll want to be able to play up to high B’ (and even a bit higher in future lessons). The majority of traditional Irish tunes never go above a high B’.

To complete our study of the D and G Major scales…

Practice playing the D major scale all the way up to B’.

Practice the G major scale starting on G (circled) all the way up to B’. Then continue the scale all the way down to D and back up to G to finish.

Practice playing in the second register with these simple tunes.

Congratulations! You’ve come quite a long way! You should be very proud of your achievement.

To review, at this stage you should be able to…

Again, congratulations on making it this far. I bet you’re ready to dive into the tunes! Before you dive in, let’s first talk about breathing…

In the tunes that follow, I have indicated good places to breathe within the tunes with a red single quotation mark. You don’t have to breathe every time you see the mark if you have enough air to make it to the next mark. As you learn more tunes you will start to intuitively learn where to take breaths without affecting the flow and rhythm of the tune.

Make sure that you are breathing from your belly. This will allow you to take in the most amount of air. It’s a common mistake to breathe in a way that just fills in the area around your rib cage. Since your ribs aren’t that flexible (like the area around your belly), you simply can’t breathe in enough air. A good way to get a sense of proper breathing is to lay on the floor and put a heavy book on your belly. You will naturally breathe from your belly when in this position and the book will go up and down as you breathe. Try to breathe in the same manner when standing or sitting. If your shoulders are raising when you’re breathing then you know you’re not breathing from your belly!

It might help to practice this type of breathing in front of a mirror so that you can watch to make sure your belly fills with air and that your shoulders stay down and relaxed.

Air: Dawning of the Day

Chances are that you’ve heard this tune somewhere before. A beautiful and simple air for us to get started with.

This is a great tune to work on your breathing with as it is meant to be played fairly slow. Make sure you are taking nice deep breaths from your belly.

Dawning of the Day

A Polka is one of the many types of dance tunes in traditional Irish music. Polkas make up a large portion of the repertoire in County Kerry where, judging by the title, this tune originated from.

I’ve harped on this before but make sure you are lifting finger T1 when playing D’. This is a good tune to practice this good habit as it only comes up twice.

Jig: Out on the Ocean

The jig is one of Ireland’s most popular types of dance tunes.

At this stage you might be tempted to play fast. Make sure that you can play the tune without mistakes and without any tension in your body (hands, neck, shoulders, etc…) before you speed things up. You may actually need to play slower if you are having trouble getting through the tune or are experiencing tension. If you are having trouble with the same section every time, practice that specific part (could be just 2 or 3 notes) slowly until you get it right.

Also, remember your breathing! Are you gasping for air? If so, you aren’t breathing deep enough. Again, practice the tune s l o w l y and pay special attention to your breaths. Fill your belly NOT your chest!

Out on the Ocean

The Reel is Ireland’s most popular dance tune type. I’ve been to some sessions where all that was ever played was reels!

This is your first trad tune that goes up to high B’. Make sure that you’re not “chickening out” and that you’re backing those higher notes with plenty of presure so that the higher notes do not squeak or break apart.

Congratulations! At this stage you are well on your way to becoming a great whistle player! I’ll leave you with a few thoughts before we finish.

Listen to the Masters

If you haven’t started already, it’s time to start building your music collection of great whistle players. It’s very important to your development that you listen to great music since “you are what you eat”!

You might want to get yourself a tune book and start learning tunes, applying the concepts that you’ve learned here. Of course, learning by ear is best. You might start trying to learn tunes by ear off recordings. A great tool to do this with is a program called The Amazing Slowdowner (Mac/PC). Click here to find out more. I use it just about every day in my own learning of tunes off of CDs and MP3s.

As if i haven’t harped on this subject enough! Without proper breathing, you’ll never be able to let the tunes flow as they should.

One thing I do when I practice is start out with a tune I am well familiar with, playing it slowly and focusing on my breathing. Because the tune is familiar, I can play it without thinking thus being able to focus in on my breaths (quick, deep breaths from my belly). If there’s anything that slips in my own playing, it’s my breathing. This is why it is so important to practice it regularly and properly.

If you wish to play fast, you’ll only get there by practicing slow. Make sure that you can play what you are playing without mistakes and without tension before speeding up.